Muppets and Monkeys and Movies! Oh My!

Amongst the scores of films coming out this year, there are at least two that I’m totally psyched to see: The Muppets and Rise of the Planet of the Apes. 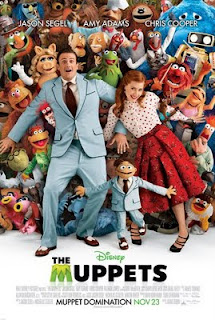 Ah, les Muppets. Frankly, there hasn’t been a decent Muppet movie since my all-time favourite, The Muppets Take Manhattan. Add Jason Segel, Amy Adams, and friends to the mix, a storyline that hearkens back to what made the Muppets great in the first place, some very cool teaser trailers and it’s hard to see how this one could do any wrong.

This time around, we get to see how the valiant apes rise up to take over from those dastardly evil humans. ROTPOTA features the acting talents of Andy Serkis (Gollum from Lord of the Rings) as the lead ape, Caesar, as well as John Lithgow as the Trinity Killer .... errr, I mean sweet, old guy losing his mind. The film also fulfills the recent Hollywood requirement that James Franco appear in every movie. Every movie. Ever. Seriously.

I’ve been meaning to write about my love of Timex watches for a long time.  I love ‘em.  I know it’s strange to “love” a watch, but it’s all too rare these days to encounter a product that really delivers.  It’s relatively light and inexpensive, easily goes into the water at the beach, and keeps on “ticking” for a looooong time without requiring a recharge every hour on the hour - how many of us can say that about our beloved fancy smart phones?  Did I mention that it keeps the time?  Really well?  ‘Cause it does.  Plus, you have to love that glow-in-the-dark Indiglo feature.  Checking the time late at night or in a dark theatre?  Not a problem.
I’ve had two Timex Indiglo watches, both given to me by my mother (world’s best mum) as gifts. My first fell out of my pocket while I was messing around with my girlfriend at the time.  I lost the watch and the girl, but truth be told I’m really only sorry I lost the former.  It was a very good watch.  So my mum bought me the replacement I have to this day, shown above. Between the two, I’ve lost and found them at the bottom of my chlorinated pool, put them in the washer and dryer, dropped, stepped, and jumped on them, and more.  And you know what?  Nothing.  They just kept on ticking.  You can’t really ask for more than that.

I have the best mum in the world.  Others will say it, but I really mean it.  I’ve lost count of the number of times that a friend has told me, “your mother is a saint!”, and meant it.  One simply could not hope for a better mum.

She has taught me so much: the value in helping people, in being kind and polite, how to drive a car, how to cook, how to be silly.  She has hammered into me the value of a good education and hard work from an early age. Mostly though she has taught me how to love.


I could go on and on about how great my mum is and the sacrifices she has made for her family.  I could recount numerous stories of her staying up late to sew me a Spider-Man costume (my favourite one), making me tea in the wee hours of the morning while I studied for exams, picking me up late at night from the city, and so on.  I’ll leave those for another time.  Right now, I just want to say I love you mum, and I am so thankful I have you in my life.
Happy Mother’s Day!
Posted by Norm Ferns at 5/08/2011 12:14:00 PM No comments: