I’ve always said that I love my friends as my family, and I love my family a lot. So it’s no surprise that I get crazy-bonkers happy whenever I get to see them, particularly after lengthy absences; this was certainly the case with my two most recent visitors.

James, hailing all the way from New Holland, had the honour of being my first guest of the year and my first Aussie visitor in Paris, exclusive of Jellybean of course. We’d first met at the UNSW Latin Dance Society salsa classes from what seems like eons ago; and though more than a year had passed since we last saw each other, we were able to pick up like it had been no time at all. Most of my friends are cool like that.


James only stayed for a day and two nights; however, he made the most of his time by exploring as much of Paris as he could on foot. As his good friend and host, I took it upon myself to weakly attempt to kill him by introducing him to the wonders of « tartare de boeuf ». Fortunately, he made it through without trouble - insofar as I know. We also played in the Musée des Arts et Métiers, containing amongst other things a Foucault pendulum (there’s one in the School of Physics at UNSW too) and cool vintage bikes and cars. 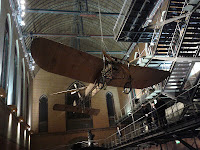 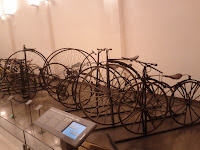 My next guest harkens back to those mad McGill days filled with time warps and battles between good and evil versions of certain holy figures; I’m speaking of course of my fellow mad scientist Igor, who kindly decided to pay me a visit from Utrecht. We hadn’t seen each other in over two years and a lot had changed in that time - mostly the loss and addition of a lot of hair on our respective heads.

Igor stayed for the full weekend, allowing for more time to get up to shenanigans. Mainly, he introduced me to a number of cool things. First, stroopwafels. ‘nuff said there. Secondly, yet another FREAKING AWESOME resource - perhaps the equivalent of crack cocaine, for the philomath. I won’t share it here, if at all, but suffice it to say that my brain is melting again, in a mostly good way. I think. I hope. Maybe not. Er, help?

At Igor’s friends’ suggestion, and accompanied by Silvia and my boy, Blue, we visited Le Manoir de Paris - essentially a haunted house for prepubescent kids. It was rather expensive at €20 a head, but also a lot of fun. Our age really showed, as we were directly and indirectly called stupid at least twice for being unable to navigate our way through without incident - unlike the prepubescent kids. Dignity going, going, … gone.

Especially fun and significant was Igor’s desire to find a plaque commemorating the location where les frères Lumière held the first public film screening in 1895; once there, Igor treated me to a very pricey hot chocolate and crème brûlée at the aptly named Café Lumière. This was my first authentic expensive Parisian dessert; and as much as the cheap bastard in me protested, I have to admit here and now that it was well worth the price; particularly in that historic setting.

Lastly Igor and I hit the Louvre for a proper visit with some of the great minds of old, oodles of statues of beings in the nude, many paintings of women "playing" delightfully (enough to put TBLOP to shame), and the odd dragon.

All in all, I couldn’t have asked for better guests, and I had a lot of fun. Hopefully the rest of the year at L’hôtel Norman will be just as good.


Perhaps. But in a world full of boxes and covers, I increasingly feel that I’m the odd ball. Still, you never know. Maybe there’s another odd ball out there just waiting to bounce around with me.

Ignore the jaded remarks on commercialism and words of despair from those who’ve given up. If you’ve got someone to love, then show them you love them; and if you don't, then take comfort in knowing you’re not really alone. Me? I’m going to spend the night with some comfort food, Love Actually or The Princess Bride, and episodes of Ten’s Offspring. 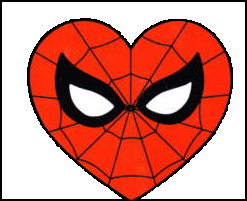 Exit the dragon.  Enter the snake. 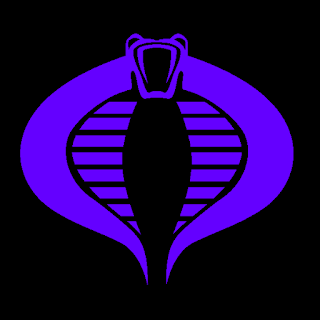 Next up is the year of the horse.  My year.  My time.  You know what I mean, you select few from back in the day.

Another day, another foe vanquished from my big bad list o’ things to do. I’d been itching to trek around the Périphérique of Paris ever since I first got here. So armed with my trusty Google Maps app and accompanied by Emily, a fellow inmate from Soviet Canuckistan, I set off on a wonderfully sunny Saturday afternoon to conquer the mean streets of Paris.


Our route took us just inside the Boulevard Périphérique to make crossing bridges easier and avoid busy highways. We started off around Cité Universitaire heading eastward, keen on quickly making this hike our bitch. Of course, we had to stop approximately five minutes thereafter to check out the vintage market that popped up at Stade Charléty for the weekend; so much cool stuff! Half an hour later, we set off again.

It was curious to see firsthand each arrondissement’s unique character. We encountered all sorts of interesting sculptures and buildings and assorted green spaces. I’d like to say that they were all marvelous and posh, but as we trekked from the 20th into the 19th our surroundings clearly took a turn for the worse; unless you consider trash and garbage bags strewn about to be “art”.  At one point we started to descend below street-level to explore abandoned train tracks and tunnels, but were warned off by some pleasant Roma. So we continued on and soon spied a small shanty town through holes in a fence. Simultaneously fascinating and heartbreaking. Heading into the 18th brought a return to the relatively normal, and things definitely picked up again in the 17th. Scrooge McDuck would feel right at home. 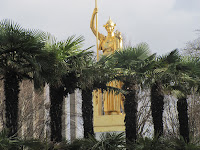 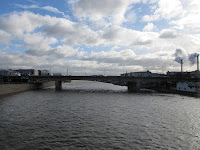 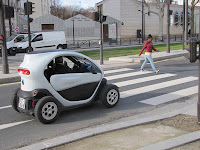 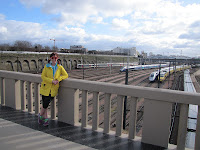 It finally started to get dark as we hit the 16th and more familiar 15th. Hunger was beginning to strike, and priorities being what they are, I made a 15 minute stop in a pâtisserie to pick up some goodies. I suddenly had mad cravings for sushi, and I must admit I nearly quit the path in search of something decent near Porte d’Orléans; however, we’d come too far to quit now. So we pushed on and soon sweet, sweet victory was ours!

The whole circuit took 8 hours, including stopping off at the vintage market, the pâtisserie, and other various mini-excursions off the main track. I had estimated a hike of 6 or 7 hours optimally, so that wasn’t too bad.  I think we probably could have walked another few hours had we not stopped just then, but once we did we totally crashed. My brand new socks had completely worn away at the heels, a result of using winter boots instead of proper hiking boots or my beloved Vibrams, which I avoided due to the possibility of wet weather. As a matter of fact, we experienced clear blue skies, light hail, rain, sunshine, and more hail, before it settled down for the evening and night. The variety of weather really added to the experience.


Oh, and I got my sushi reward in the end via a post-hike feast from Sushi Shop. Thankfully you can order and pay online without too much hassle (take note Pizza Hut).  I was actually quite impressed with the speed of delivery and the quality of the product, not having expected much from a chain. I’ll definitely be ordering from them again. Finally, we finished the night in style with Seven Psychopaths. 'Cause you just can't go wrong with The Walken.

Here are a few more snaps: 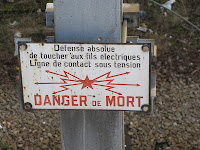 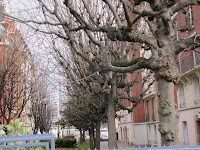 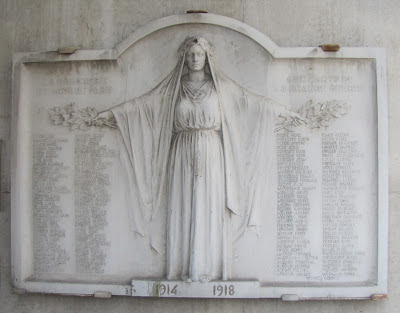 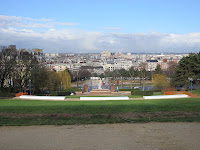 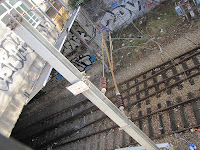 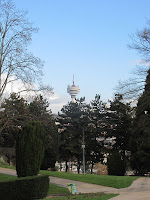 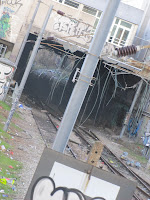 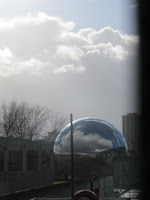